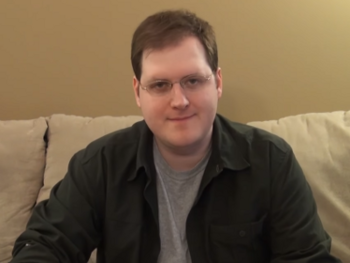 Lewis Jeffrey Lovhaug (born August 19, 1987) is an internet reviewer from Minnesota, best known as Linkara, the host of Atop the Fourth Wall, as well as the host of History of Power Rangers, an overview of the Power Rangers franchise.

He is married to Viga Gadson of both Viga Loves Comics and Idols of Anime fame.

Among the stuff he's produced:

Tropes that apply to Lewis Lovhaug: