Loved I Not Honor More 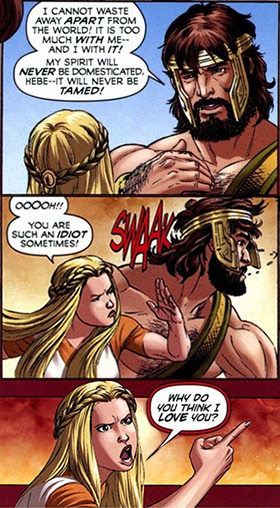 It ain't just Amazons that want Hercules.
"I could not love thee, Dear, so much,
Loved I not Honour more."
— Richard Lovelace, "To Lucasta, Going to the Wars"
Advertisement:

How can The Hero balance his love life with saving the world, especially when Love Hurts and Love Is a Weakness? Some heroes conclude that the only solution is to leave the love life out of the equation and become a Celibate Hero. Others (usually of the reluctant or adolescent variety) take the opposite approach and Always Save the Girl whenever love and heroism conflict. Finally, others Take a Third Option — this trope: love, even marry if you want, be fruitful and multiply, but always put your higher calling first.

Instead of becoming a Celibate Hero, heroes who say "loved I not honor more" enter a committed relationship and accept the strain that their role will put on that relationship. They allow themselves to fall in love, but the romance must take a backseat to duty. They'll dislike having to leave the wife or girl home alone to go save the world, but they won't hesitate (long) to do it. Making a Heroic Sacrifice to save the girl is perfectly acceptable, but turning to the Dark Side isn't. There will be times when the lovers can't spend as much time together as they want, when the girl will get jealous of her non-human rival, and when he will have to make a Sadistic Choice. There will be tears for his safety on her part, guilt on his part for making his beloved suffer, and periods of believing that she would be better off without him. But in the end, she will have to admit that his devotion to a heroic cause is one of the things she loves and admires most about him, and they will have the satisfaction of knowing (but not necessarily making sure their enemies know) that withstanding so much tension and danger, especially with The Lady's Favor as an indicator, makes their love all the stronger.

Many writers, naturally, take a more cynical view of such cases, and are not averse to depicting such heroes as selfish jerks who are not only too weak to handle their burden alone but willing to make others miserable instead of declaring I Want My Beloved to Be Happy. Note that cynical and more optimistic approaches to this trope both sympathize heavily with the girl. And, sorry, Aeneas, but sleeping with the girl and then splitting the morning after to continue The Quest doesn't count; try that, and you're asking for a Woman Scorned.

Classic gender flipped cases usually revolve around the girl being more sensible in a struggle with passion, telling the guy that since it's impossible for them to be together, whether due to an Arranged Marriage or a Virgin Power, they should be practical and accept that instead of sacrificing everything to satisfy their passion. Reason and morality are higher callings than love to her. Modern variants of this trope often cast the hero as a soldier kept away from his/her family by the demands of the service.

The most obvious modern solution to this trope is for The Hero to pick a girl who can be his partner (or who has at least lived that lifestyle, i.e. a soldier marrying another soldier) rather than be forced to sit at home waiting for him, but this wasn't always an option throughout history. Not that many Violently Protective Girlfriends haven't said, "Screw it, I'll go with you anyway!" to that Double Standard, of course.

This trope can be particularly hard on villains who make a Heel–Face Turn while in a committed relationship. They'll have to rely on Love Redeems to get their significant other to understand why he suddenly left her to side with the enemy.

Doesn't overlap with The Masquerade Will Kill Your Dating Life because your significant other has to be in on any masquerade in cases of this trope. May overlap with It's Not You, It's My Enemies but not necessarily, unless the hero leaves his love interest to protect her (then it becomes It's Not You, It's My Enemies); if the hero could recite Lovelace's poem in context, it's this trope (too). Compare Married to the Job and Wet Blanket Wife.

Alternative Title(s): Loved I Not Honour More, Duty Before Love