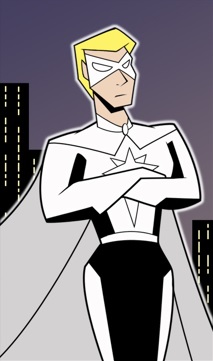 is a webcomic on Comic Genesis that was updated on-and-off again from March 16, 2006 until September 19, 2012. It was created by Lewis Lovhaug, also known as Linkara, years before he became known for criticizing comic books on his Web Original series Atop the Fourth Wall. Lovhaug wrote the series for its entire run and drew the comic up until June 17, 2009 when Chad Rocco

became the comic's artist and then on December 7, 2011 Sergio Ragno

became the artist for the remainder of the comic's run. By the comic's end, Lovhaug lost interest in continuing the series

and not only shelved the project indefinitely but also officially released the comic and all of its characters into the Public Domain. In 2021, it was announced that the series would be rebooted by none other than Lovhaug's ex-girlfriend Iron Liz.

Carter Granholme is a humble furniture store owner living in Pharos City, a once promising city in the Midwest that has since become a crime infested mess with human traffickers at large through an organization appropriately named The Slavers. Although he was born with light-based superpowers, he had always abided by the wishes of his ultra-pacifist parents who were murdered. That is until Carter became fed up with crime in the city and took on the role of the Lightbringer to fight off the Slavers, with a little help from the city's chief of police Edward Crane, and arise victorious as the city's symbol of hope and the world's first superhero.
Advertisement:

But the rise of the superhero leads to the rise of supervillains who challenge The Lightbringer in many physical as well as philosophical confrontations. As a result, Carter often struggles with the nature of good versus evil and the role of a superhero in society.

One of Carter's employees, Hannah Ments, gets wise to his double life and actively helps him in his fight against crime. She has since become a fan favorite.

Lightbringer and one of his enemies the Smiling Man also play a big part in The Crossoverlord.

Not to be confused with...

This hero has nothing to do with the 1993 Beat 'em Up released by Taito, outside maybe being a violent Epic Fantasy. We hope he's unrelated to the other guy called Lightbringer. Also unrelated: The Lightbringer Series, Uther the Lightbringer.
Advertisement: