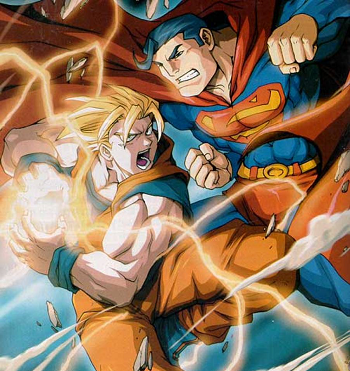 Goku fighting Superman!? Let's get ready to rumblllllle!
Samurai Jack: Your sword smells of blood...
Afro Samurai: ...so does yours.
— DEATH BATTLE!
Advertisement:

Ah, the Intercontinuity Crossover fight. Everyone wonders once in a while "If X and Y met, who would win in a fight?" And whether you come up with incredibly thorough theories of your own, argue it with others, write a fanfic, or just resort to name-calling, everyone has their own opinion.

Such bouts between characters from different works will often involve one or more of the fighters being pulled into a different continuity, the strangers fighting for no logical reason and handicaps or caveats being introduced to make the fights more interesting. Also usually ends with the most popular of the combatants winning frequently due to the opponent conveniently not using his powers or resources to the fullest. Far more often, however, no one will actually win at all in order to avoid ticking off the loser's fanbase; this is typically accomplished either by a common enemy appearing and thus allowing both characters to save face, or more humorously, a Memetic Badass of the ironic kind arriving to curb-stomp everyone involved.

Characters commonly subjected to this include those identical or at least the same kind of character when compared to someone else and prominent characters in franchise or works with heavy amounts of Fandom Rivalry between them.

And as for the location, fanfic writers often write it as taking place in either Tokyo, New York City, or the occasional rural town.

Overlaps with Massive Multiplayer Crossover when more than 2 works are involved. If the characters end up in a relationship instead of fighting, it's a Crossover Ship. Characters discussing other characters in one of these battles is a Hypothetical Fight Debate. Compare to Character Tiers and Guest Fighter. See also Cool Versus Awesome. Contrast with Story-Breaker Team-Up.

If you were looking for the song, go here.

ATTENTION: The examples list is for matchups actually portrayed in media. Matchups that you or the fandom would like to see? There's a forum for that!