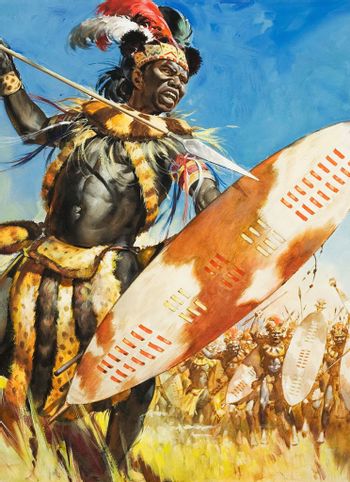 The Genghis Khan of South Africa and the Founder of the Zulu Kingdom. Shaka kaSenzangakhona (circa July 1787 – September 22 1828) was born a prince of what was then a fairly minor tribe. He served as a warrior for the nearby chieftain Dingiswayo who would help Shaka secure his position when his father died.

After this came the typical years of Gambit Pileup that constitutes politics wherever it takes place. During this time Shaka was able to refine his army into the form it would later become. It was composed of a number of Impis (usually translated as "regiment") and systematically trained to attack with thrusting spears called iklwa (as opposed to the assegai javelins) using double-envelopment tactics. Besides the added tactical sophistication, the sheer frightfulness of being willing to close to hand-to-hand combat so ferociously (a feat few unarmored troops can be counted on to do regularly) broke the power of rival tribes. Other details include rigorous training and a system of military apprenticeship that made the Zulu army something close to a professional standing army (the only thing it might be said to have lacked to make it a "professional standing army" was a Vast Bureaucracy of support troops, which concept wasn't available in the area) and many historians have marveled at the Zulu army's rigorous training and organizational features.

In the process of his conquests Shaka was able to assimilate a number of tribes until he had an empire that could field tens of thousands of warriors. He died in a coup and was succeeded by his half-brother Digaane.

Needless to say, Shaka is also the center of epics and folk tales circulating among the peoples of his former empire. Like it often happens with folk memory, they don't shy away from misrepresenting the facts to make the story better, and often don't mind including various fantastic elements.