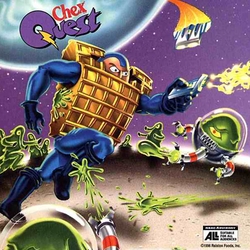 Wearing breakfast as armor? Makes perfect sense.
Doom actually does teach you how to eat cereal! At least according to General Mills.
— Dorkly's "TINH: The Raddest Facts About Doom"

Chex Quest is a 1996 first-person shooter built from the Doom engine. Originally shipped in six million boxes of General Mills brand cereals. The game itself was notable for being the first CD game to be bundled in cereal boxes as a prize. The first game involves the Chex Warrior going down to a colonized planet invaded by a race of aliens called the Flemoids, on a mission to rescue the inhabitants.

In 1997, Chex Quest 2 was released, but instead of being shipped with breakfast cereals, this time it was distributed exclusively on the Chex Quest website. Numerous fansites still distribute the game to this day.

There were rumors of an impending Chex Quest 3, but no such thing ever came to light... until September 2008, more than a decade after Chex Quest 2's release, when former Digital Cafe employees Charles "Chukker" Jacobi and Scott Holman got together, created a new five-map campaign, and released it for free.

Chex Quest 3, which includes all three Chex Quests in one package, can be downloaded from Charles Jacobi's website

. (Requires the ZDoom source port, or a derivative thereof.)

On April 18, 2016, nearly a decade after Chex Quest 3 was released, Chukker announced a remake of the first game in Unreal Engine 4 was in the works

To tie in with the remake, the anthology comic book, Untold Tales of Chex Quest was released.