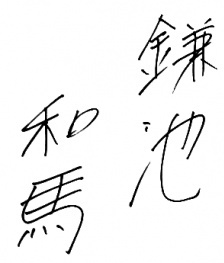 No photo available.
"If I don’t keep writing, I’ll crash. Like an airplane."
— Kamachi explaining how he's able to write such an enormous amount of material in such a short timeframe
Advertisement:

A Japanese author of various light novels and manga, best known by his first light novel series, A Certain Magical Index. Kazuma Kamachi is his pen name, his real name and identity are as of yet unknown. Before becoming the famous writer of the Index light novel series, Kamachi wrote a story entitled Schrödinger's City as an entry in the 9th Dengeki Game Novel Prize; unfortunately, his submission failed to reach past the third selection stage of the said competition. However, his story caught the attention of the editor-in-chief of Dengeki, and Kamachi later becomes in-charge in writing the book Want to Try Writing?, which became his debut as a professional writer.

Being known for his prolific nature as a writer and also having stated that writing is his pastime, Kazuma Kamachi has an extensive list of works.

He also helped work on the anime adaptations of A Certain Magical Index (including its movie Miracle of Endymion) and A Certain Scientific Railgun. He also wrote the story for the Square Enix mobile card battle game Million Arthur.

Kazuma Kamachi and his works provide examples of: