Writing by the Seat of Your Pants 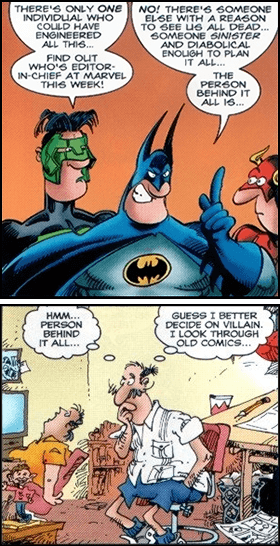 Writing a comic book Crisis Crossover is not rocket science.
"Writing a novel is like driving a car at night. You can see only as far as your headlights, but you can make the whole trip that way."
— E.L. Doctorow
Advertisement:

Some authors plan meticulously. Before they even start to write, they have a detailed plot synopsis, character biographies, pages on the setting, and a detailed backstory to the main tale... at the least.

Others just sit down at their word processor and type whatever comes into their head. This article is dedicated to them.

This is not necessarily a trope about authors who simply write without a speck of planning at all (although it can be), but rather those who, overall, are improvising as they write. They may already have invented their characters, perhaps they have a vague plot bubbling in their head, even a few notes on Backstory or setting. What separates this kind of writing from planned writing is that these writers are prepared to throw those notes in the trash the moment they come up with an idea that they prefer. So you're writing a hardboiled crime fiction novel: Remember that takeaway place you thought up on the spot to give your sleuth somewhere to eat his lunch? That would be perfect as a front for the Big Bad's drug-dealing business. Making a movie? That actor's take on that character is way better than what you originally had in mind. Why not rewrite half his part to take advantage of that vision?

This does not always happen voluntarily, mind you. In some cases, the writer did indeed have a carefully planned storyline in mind until it was suddenly struck down by either Executive Meddling, an Executive Veto, or some other case of Real Life Writes the Plot, and the writer had to scramble against the deadline to come with a replacement story.

This is especially common for manga writers making comics for serial magazines, because of the nature of that business in Japan; they must get out at least one completed installment done for each magazine issue, or risk ending their source of income and livelihood. Because writing well is incredibly hard to do, and the schedule of a mangaka is one of the most ridiculous in the publishing world,

◊ writers frequently resort to this trope just to get an issue out there! Sometimes it even forces widely published and respected artists to put out chapters they clearly had not even finished drawing.

The trope name comes from the phrase "flying by the seat of your pants", a colloquialism for "deciding a course of action as you go along".

Like most things, this can be done well, or badly. There's more than a few examples where the final product ends up so well put together that you would have never guessed it was an example of this writing approach. Aborted Arc, The Chris Carter Effect, and Kudzu Plot are what happens when Writing by the Seat of Your Pants leaves too many loose plot threads.

This is the novelistic version of Schrödinger's Gun or the Indy Ploy; when the author of a series canonizes fan suggestions as he goes along, see Ascended Fanon. Can also be related to I Just Write the Thing. Compare Off the Rails where a GM may be forced to improvise as players break away from the planned story. Contrast The Producer Thinks of Everything and Developer's Foresight, where the creative team behind a project has meticulously planned every facet of their story or game.

Please only add examples where the author admitted to doing this. This is not a page for speculation.

open/close all folders
Comic Books
Comic Strips
This is common in newspaper comics, where because of tight deadlines it's hard for creators to plot things out in advance. This is why it's so common for storylines to end abruptly without resolving anything. Specific examples:
Music
Professional Wrestling
Radio
Tabletop Games
Video Games
Web Animation
Webcomics
Web Original
Other