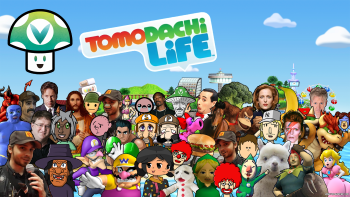 This page concerns a subseries of Vinesauce that has since taken on a life of its own — namely, Vinny's Tomodachi Life streams. They began on June 7, 2014 (when the game itself was released) and continued for 50 episodesnote technically 51, because an episode focusing on corrupting its predecessor, Tomodachi Collection, is counted as canon for certain reasons, with Southbird labeling it as an episode with his edit (the 50th being in mid-May 2015).

Vinny manages "Vineland Island", an unknown territory inhabited mostly by freaks and rejects (often from other series). Their exploits in love, friendship, and other such subjects are the basis of the series; the game's natural bizarreness meshing well with his sense of humor. Most of the streams' charm comes from Vinny's reactions to the game (which are often loud and hilarious).

(this link doesn't include the Collection corruptions, which are here

). For those looking for a quicker watch, Captain Southbird (a Vinesauce fan who was eventually made an official stream editor) has created condensed versions of each stream here

. Southbird also has a derivatives playlist

featuring specific highlights of the first 50 episodes (including an hour-long special of the first series' most memorable moments) as well as videos that contain non-canon (not from Vinny's game) videos that focus on the cast's antics. Vinny himself has made a "greatest hits" video

(uploaded in August 2014, thus only including moments from the first few months) and his own condensed version

of the Tomodachi Collection corruption stream. There's also a completed recap page on this wiki.

As a donation incentive from the 2015 Vinesauce charity stream, the series was renewed as "Tomodachi Life Resurrection: Survivor Edition" on July 26, 2015. The series is essentially a continuation of the main series, with a twist: Each episode focuses on the successes and failures of the characters, and at the end of them, a Survivor-style vote is held to see who gets evicted. This went on for five episodes, with Episode 55 being the Series Finale. Aside from a tribute to David Bowie in January 2016 (and complete revisit to the game as an April Fools' Day joke in 2017), Vinny has stated that there will be no more streams of the game, though he will stream a sequel if one is released and mentioned the possibility of returning to this game if it receives a significantly expanded update in the vein of Animal Crossing: New Leaf receiving one with its Welcome amiibo update in 2016.

After the series finale, Southbird sort of took the reins and uploaded variants on the series formula, starting with using a modded system to play the European and Japanese versions of the game. He would later pay a "Totally Normal Visit to the Island" that involves randomizing and replacing the text of Tomodachi Life, this time going back to the North American version of the game, as well as making a "Metadachi Life" video with the North American version that replaces text with YouTube comments. The international videos only feature text-based commentary, while the "Totally Normal" and "Metadachi Life" videos feature vocal commentary, with Southbird's brother, Zydelski, making a guest appearance in the "Totally Normal" video. All videos from Southbird's copies of the game are listed on his "Vinesauce Tomodachi Life Derivatives" playlist.

Compare Mayor Vine, which is also edited by Southbird (from Vinny's Animal Crossing: New Leaf streams) and has a similar Slice of Life narrative. (There's even a crossover which incorporates it into Tomodachi Life's canon, possibly; information on it will be mostly restricted to that series' pages.)

In June 2017, Vinny played the demo of Miitopia, which was followed by a playthrough of the full game; see Vinesauce Miitopia for Vinny's streams of both the demo and the full game. The streams of the main story have received edited versions by Southbird and characters from the Tomodachi Life streams appear in the Miitopia streams alongside several newcomers.

Note: Since Vinny and his Mii are separate characters for the most part, "Vinny" refers to the streamer, and "Vinesauce" refers to his look-alike Mii, though Vinny himself doesn't always distinguish between the two. In addition, Southbird's islanders generally refer to him as "BootlegVin's look-alike" in most of his Out-of-Band videos because BootlegVin was the first Mii added to all except his main copy of the game.

"Until the break of new day."