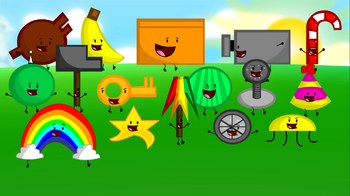 An Object Show from Romania, Challenge to Win is an animated web show created by Mandea Catalin (or, for the sake of you not wanting to butcher the pronunciation of his name, 100dcx). Being an object show itself, you might already know the premise (it's a competition Game Show). It made its debut on Scratch on September 20th, 2012 and transitioned over to YouTube later on.

It currently has two seasons, with its first season having 20 episodes total in its five-year run from 2012 to 2017. It is currently on its second season, alternatively named Challenge 2 Win.

If you want to check out the tropes for the games, see Challenge to Win: The Hunt for Gifts, Candy Cane's Chilly Christmas, and Candy Canes New Years.