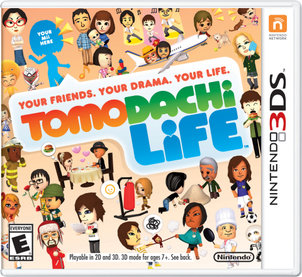 Your friends. Your drama. Your life.note Now with grown-ups fighting over teddy bears!
Have you ever had that dream of starting a new life? With friends, family, celebrities, or even a bounty hunter. Sha la la la la, island dreams! Real life is too small to contain your dreams. That's why the world needs Tomodachi Life.
—The Mii group Island Fun singing "Tomodachi Life", Tomodachi Life Direct

However, what has really given it such a cult following is its plain weirdness. It's quite difficult to describe how strange this game gets if you haven't played it, but the Miis in your game can, amongst other things, compete in rap battles against each other, melt into gray puddles when they eat the food they hate the most, and face off in an RPG-style Boss Battle against a Virtual Boy. It Makes Just As Much Sense In Context.

See also Miitomo, a spinoff social game for mobile devices, and Miitopia, a RPG with all the quirkiness of the Tomodachi world.