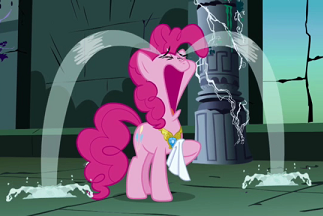 This is the story of a filly
Who cried a river and looked kinda silly...
"Pedro's tears are once again flowing like waterfalls!"
— Pedro, Excel Saga
Advertisement:

Just as the human body contains gallons of highly pressurized blood and saliva, it also contains an equal amount of tears, at a similar pressure. Under the proper emotional stimulus, these tears can emerge as cascading sheets, actual waterfalls, or even firehose-like streams, all emitted from the eyes (of course).

Some characters require less stimulus than others.

As a visual trope, this is Older Than Television; older American animation had a number of minor characters (who were usually minor in the sense of age as well) who would begin high-pressure crying at the drop of a hat (sometimes preceded by Puppy-Dog Eyes, though that was more typically a signal for a poignant single glistening teardrop). Often called the "Fire Hydrant Wail" in the case of the more extreme versions.

Compare Sparkling Stream of Tears, Manly Tears, Crying a River, Tender Tears. Drool Deluge is the saliva equivalent. Contrast Trying Not to Cry, Single Tear, Inelegant Blubbering (both of which involves rather fewer and rather more realistic tears), Fireball Eyeballs.

Give in to the sadness.

THE KITTEN DIDN'T MAKE IT!

Give in to the sadness.

THE KITTEN DIDN'T MAKE IT!