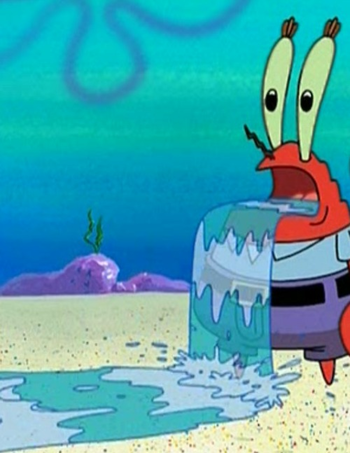 A Droolugenote portmanteau of "drool" and "deluge" is when more drool than should actually be possible pours out of something's or someone's mouth. This can range from, say, making a visible puddle below, to covering the entire building with a hip-deep flood. Of course, this isn't just limited to cartoons, but that's where it's seen the most often.

Usually Played for Laughs, but might be intended to cause Squick.

Compare *Drool* Hello, where something above the characters signals its presence with a drip of drool, and Phlegmings, where a character's mouth has lines of drool to be gross or scary, Waterfall Puke, where characters leave a pool of vomit, and Ocular Gushers, the ocular equivalent.