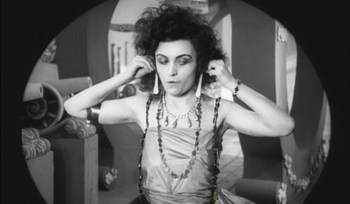 The Wildcat (Die Bergkatze) is a 1921 German silent romantic comedy film starring Pola Negri, directed by Ernst Lubitsch. Lieutenant Alexis is an infantry officer who is sent off to a punishment assignment on the border (of some vaguely Germanic country) because he's been catting around with the local women too much. On the way he is waylaid and robbed by a group of bandits led by fiery Rischka (Negri). She takes a fancy to Alexis and lets him go, much to the puzzlement of her father, the nominal bandit leader.

After finally making his way to the frontier fortress, Lt. Alexis leads a punitive expedition against the bandits, but it ends in embarrassing defeat as the ragged bandits send Alexis and his men in headlong retreat. That doesn't stop Alexis from acting like he won a victory, though, and the whole fortress and town have an elaborate celebration—which Rischka and the bandits decide to rob.

The Wildcat didn't do that well in Germany, and unlike Lubitsch's other silent films did not even get released in America, but it didn't slow down the careers of Lubitsch or Negri, both of whom came to America soon after and went on to success in Hollywood.

Not to be confused with a trope called The Wildcats.