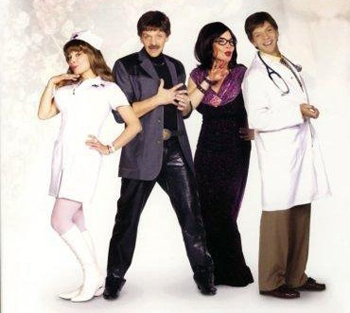 From left to right: Ashley, Brad, Criquette and Brett
All of this is of a rarely seen insignificance.
—Brad Montgomery during the Series Finale
Advertisement:

This comedy show originated from various skits in the French Canadian program Le Grand Blond avec un show sournois (The Big Blond with a Devious Show), which parodied various Soap Opera tropes through the lives of fictional archetypes of this kind of genre. The skits proved so popular that these characters finally got their very own TV series ; so was born Le cœur a ses raisons (The Heart Has Its Reasons).

The show, which originally aired on TVA, is entirely dominated by Rule of Funny and is willingly trying to be absolutely terrible in terms of quality, in an hilarious way. Every single trope originating from soap operas is mercilessly parodied, although the creators confess that sometimes they failed to attain the degree of ridicule some actual soap opera shows possess.

The show more than often verges on absurd humour, surrealism and postmodernism. However it also has its own plotlines and shocking twists, as strange as they may be, and many spectators actually grew to like the stereotypical characters. With three seasons, the show was cancelled after the incredible revelation of the series finale, due to lower ratings.