Repeating So the Audience Can Hear 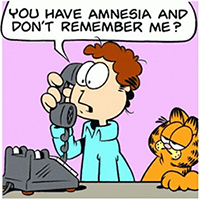 "And now it's worse because I'm repeating everything you say into the phone?"
"Appear on your TV show? Tell our side of the story? You'll see us there? Goodbye? Dial tone?"
— Homer Simpson, The Simpsons, "Bart-Mangled Banner"
Advertisement:

The tendency of writers to have a character repeat dialogue spoken to them that the audience wasn't able to hear. This often happens with telephone conversations, or when the person speaking the unheard dialogue is The Unintelligible, speaks a different language, or is The Silent Bob.

Sometimes this trope is justified when a character is surprised by the information, or are unsure that they heard correctly (or at least want to verify that they have), or when they need to relay that information to a third party (often cops) without the listener being aware of it. Done poorly, however, it can very easily sound ridiculous when characters are repeating what is essentially blatant exposition.

See also Let Me Get This Straight.... Also, see Repeat to Confirm as one way this can be justified. If you can hear both sides, it's Parrot Exposition. A close relative of Voice for the Voiceless. Compare Sounding It Out for this trope applied to written documents.

Alternative Title(s): So What You Are Saying