Series / The Fall and Rise of Reginald Perrin 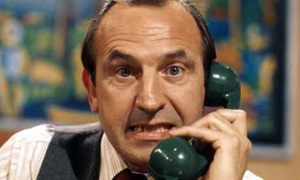 The Fall and Rise of Reginald Perrin is a 1970s British sitcom written (and developed from his own series of novels) by David Nobbs. The series starred Leonard Rossiter as Reginald "Reggie" Perrin, an advertising executive at Sunshine Desserts trapped in a dreary existence and pointless job who is in the throes of a full-blown midlife crisis. Three seasons of episodes were made under this title. The protagonist's strained and often bizarre behaviour, sometimes surreal flights of fancy and an always dark undertow — the first series ended with Perrin faking his own suicide — mean the show remains an enduring counterpoint to the more bland and straightforward sitcoms of its era. In 1996, a dozen years after Rossiter's death, a belated fourth series was made with the remaining cast under the title The Legacy of Reginald Perrin.

In the '80s the show was adapted as an American sitcom called Reggie! with Richard Mulligan in the title role, and more recently remade as Reggie Perrin, with Martin Clunes in the title role.