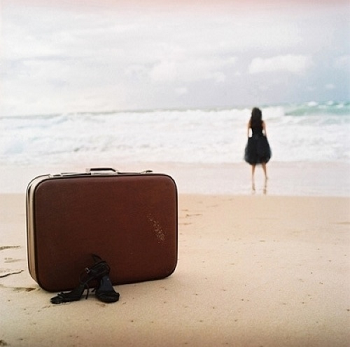 "Lay me down
Let the only sound
Be the overflow
Pockets full of stones..."
— Florence + the Machine, "What the Water Gave Me"
Advertisement:

This is an example of being Driven to Suicide in which a character walks or swims into a body of water, such as an ocean, lake or river, and drowns in it. This usually happens at nighttime for a calm, allegedly "painless" death. The sea, befitting this mood, will more often than not be relatively calm. This trope may evoke despair, or quiet contemplation, or both. The scene itself may well include dialog using "drifting away" metaphors.

Another version of this is Sailing into the Sunset, where the protagonist takes a small boat and heads to the blue seas with no intention of ever coming back. Death may not necessarily be due to drowning, but by exhaustion, sunstroke, dehydration or perishing in a storm.

May overlap with Barefoot Suicide and/or Symbolic Serene Submersion.

Note: This trope does not include examples of jumping into the sea, via cliff or bridge or such, as that evokes a different mood, and is usually more about hitting the water in any case.

Advertisement:
This is a Death Trope, so expect spoilers, marked and unmarked.