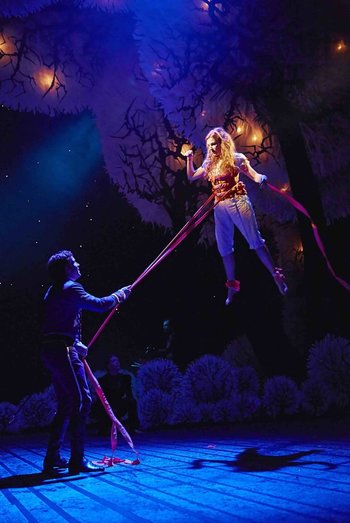 The Light Princess is a 2013 musical by the National Theater in London, with music and lyrics by Tori Amos and book by Samuel Adamson. It is based on the fairy tale of the same name, about a princess who floats and how she is brought down, but aside from that and a few other minor plot points, it shares very little with its source material.

This Light Princess, here named Althea, is the youngest child of the king of Lagobel, a wealthy desert kingdom. When she was 6 years old, Althea’s mother died. Afraid of all the weeping and grief surrounding her, Althea lifted her feet off the ground, and tried to follow her mother to heaven. From that day, she never cried, nor had any emotional or physical gravity of any kind, deciding to use constant laughter and lightness to avoid having to deal with any difficult emotion, and, along with her friend Piper, is locked away in a tower by her father. Across the Wildnerness lives Prince Digby, the oldest child of the king of Sealand, Lagobel’s rival, a kingdom flowing with rivers and lakes. When he was 8 years old, his mother questioned his father’s greed in wanting to invade Lagobel, and mysteriously died. Afraid of the king, no one in the kingdom dared weep, except for Digby. When his mother died, so did his sense of levity and happiness, and from that day he never smiled, letting his grief weigh him down completely, and eventually being called The Solemn Prince.He grows up under his father’s watch as a dutiful and skilled warrior.

10 years later, on Prince Digby’s coming-of-age day, Althea’s older brother, the crown prince Alexander, is killed by a Sealand spy, leaving Althea as heir to the throne, which she dreads. Running away to the Wilderness, she happens upon the Sealand army beginning their war on Lagobel. Retreating from the battle, she comes upon a secret lake in the woods…and so does Prince Digby, having just led the Sealand army to victory against Lagobel. As a romance begins to blossom between the two, their kingdoms grow increasingly at odds, and Althea’s father takes more desperate and drastic measures in attempt to bring her down…

The soundtrack is available to listen to on YouTube

The Light Princess provides examples of: