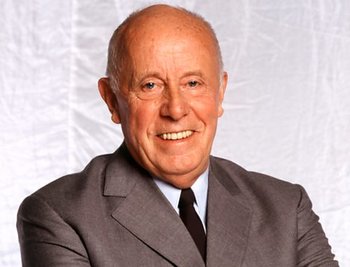 "The whole point about becoming an actor is variety and changing roles."
Advertisement:

Richard Wilson, OBE (born 9 July 1936 in Greenock, Scotland) is a veteran Scottish actor. He is most known for playing Victor Meldrew in One Foot in the Grave (it is said that he's constantly hounded to say the character's Catchphrase "I don't believe it"), though younger audience may recognise him as the royal physician Gaius in Merlin. Besides acting, he also works as a theatre director and was Rector of the University of Glasgow.

Richard Wilson is known to be very active politically. He's a supporter of various right groups for LGBT and people with disability.