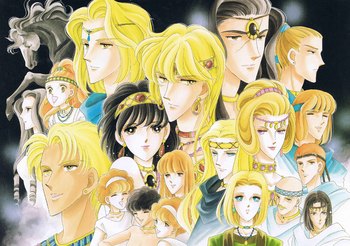 Red River (Sora wa Akai Kawa no Hotori note lit. "The Sky Is Next to the Red River") is a historical fantasy shōjo manga series by Chie Shinohara. It was serialized in Shojo Comic from 1995 to 2002.

While Red River is the official English-language title of the series, the manga is also known as Anatolia Story in regions such as Germany.