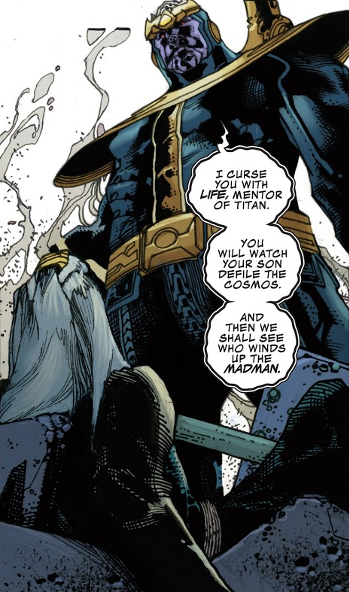 "I want him to live a long life alone with his cowardice."
— Westley, The Princess Bride
Advertisement:

Some work towards crushing their opponents. Others, though, prefer to just step back and watch them live on. This is "Cruel Mercy" — sparing one's enemy (or, in some examples, even actively keeping them alive) as a punishment rather than a reward.

Heroes rarely kill their enemies: they either practice Thou Shalt Not Kill or have a moral friend remind them "If You Kill Him, You Will Be Just Like Him!" if they ever get too tempted. However, some heroes are creative. Much like a torturer using a Cool and Unusual Punishment, the hero does forgive the villain, or at least spare his life, but does so only to inflict suffering and/or enact some poetic justice.

Villains will also do this. If they are doing it for revenge, their aim will be to make the hero feel what they've gone through. Some are mental — rather than wishing to hear So Proud of You, it's their arch-enemy's disapproval they start to crave. Other villains are trying to make the character break down — they subject them to a series of Mind Rapes and make them watch as they destroy what's precious to them, all in an attempt to push them beyond the Despair Event Horizon. Maybe they want to see the heroes cry, or bring them over to The Dark Side. Some villains delight in showing the hero to be Not So Stoic, or they wonder what will happen if they Teach Him Anger... or they just enjoy ignoring the hero's repeated pleas to Get It Over With.

There is no typical Cruel Mercy; each is tailored to the person for maximum effect. However, there are a few repeating variations. Sometimes, one is just allowed to live, especially if he believes Might Makes Right and Asskicking Equals Authority, and now that he isn't the strongest, his self-esteem is non-existent. Similarly, some villains lose it because Good Hurts Evil and Evil Cannot Comprehend Good, so the hero's mercy is a kind of Brown Note. For others, the hero may force them into a mundane life where they go through a daily mental Humiliation Conga. Still, more might refuse to take a life themselves but won't deny others — especially those who have been wronged by the villain — their own chance. In some situations, the hero may decide that being left to live with the consequences of his actions is the most fitting punishment for the villain. And sometimes, if the villain is too dangerous to let free, he is trapped in a Tailor-Made Prison along with the people he hates most in the world, or with a view of something he despises or which upsets him...

Usually, the villain or one of the hero's friends will ask "Why did you let me/him live?" Expect the hero to give a vivid description of how they believe they are being much crueler this way. Might also overlap with Not Worth Killing if the intended message is used to insult the value of the person being spared.

See also Bait the Dog. Not to be confused with Villain's Dying Grace. Contrast Mercy Kill, which aims to do the exact opposite, Do with Him as You Will, where the hero only spares the villain to let others kill him, and Sparing the Final Mook, where the hero grants mercy to a usually harmless ordinary mook after defeating others. Contrast Go and Sin No More, where the villain is grateful for the hero's mercy. Inverse of Cruel to Be Kind, where the act is hurtful but will ultimately benefit the victim. If the Mercy is genuine and the Cruelty perceived, it's Don't You Dare Pity Me!. May be part of And I Must Scream or overlap with Fate Worse than Death.