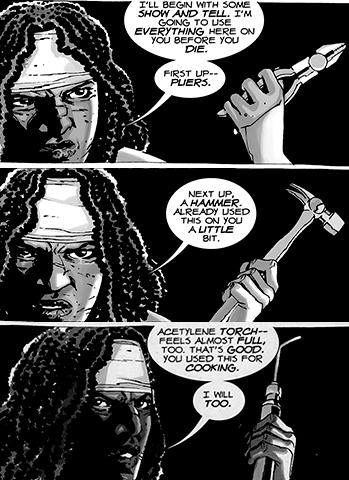 Michonne is about to get medieval on someone's ass. And just like Zed, he totally deserves it.
"'To the pain' means that the first thing you lose will be your feet below the ankles. Then your hands at the wrists, next your nose... The next thing you lose will be your left eye, followed by your right. [...] Your ears you keep, and I'll tell you why: so that every shriek of every child at seeing your hideousness will be yours to cherish; every babe that weeps at your approach; every woman who cries out, 'Dear God! What is that thing?' will echo in your perfect ears. That is what 'to the pain' means; it means I leave you in anguish, wallowing in freakish misery, forever."
— Westley, The Princess Bride
Advertisement:

Torture. It can be slow, it can be quick, but it is always painful and, like all dastardly plans, goes so much better with a little gloating.

Don't just cut the victim; tell them about it, describe every last detail to make them squirm. You can describe things that you couldn't show on TV, and any villain who would do this you know is either irredeemably evil, totally insane, or both.

If the villain has a more clinical approach to his work, however, there is often a meta version of this trope where the audience is treated to a slow camera pan across the torture instruments, which are laid out neatly on a table. He may describe the history of his technique or the specific effects on the body. This tends to underscore how cold-blooded and Wicked Cultured he is.

Alternately, the Evil Overlord can describe to the hero just what his Death Trap does: "Every time you drop a bead of sweat on the plate below you, you will be lowered an inch towards the pit. Inside the pit is a ravenous pack of razor-toothed flying lemurs with lasers on their heads who have been trained to kill anyone with your particular blood type. You stand no chance of surviving this grisly fate, as I have just turned up the thermostat."

Expect the rule of Unspoken Plan Guarantee to apply, giving the hero an almost 100% chance of escaping the described fate.

When he doesn't, though, count on Scars are Forever.

A third variation is to have the clever assassin who has poisoned their mark describe in every small detail exactly how the poison works, while they sit calmly in their chair watching the victim squirm. Sometimes the assassin has not, in fact, poisoned the victim at all, but the description is so vivid that the victim either passes out or dies of fright. Fortunately for the victim, the assassin is often Carrying the Antidote.

The fourth and final variation is common in kung fu stories. Hitting someone in a specific way in a specific Pressure Point on his body can have any number of effects on his body, ranging from beneficial to outright fatal (though the latter is usually reserved for villains or particularly vengeful martial artists). Once the martial artist performs the technique, he will then explain, in exacting detail, what the technique does to the character in question before leaving the character to his fate. It's particularly common among Old Masters.

Historically this is Truth in Television, part of a three-step process to encourage the prisoner to be more cooperative. 'First degree' torture involved verbal threats of what you're going to do, 'second degree' was showing the prisoner the instruments of torture, while 'third degree' was actually putting said instruments and techniques to use.

See also Calling Your Attacks, Diagnosis from Dr. Badass, Just Between You and Me, Too Kinky to Torture, Cut His Heart Out with a Spoon. Very popular among characters who practice Revenge by Proxy, especially those who find Forced to Watch a bit too impractical to pull off.