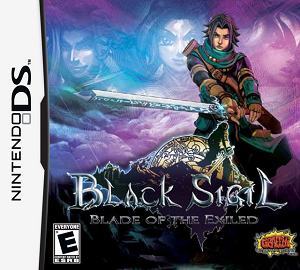 Black Sigil: Blade of the Exiled is an Eastern RPG developed by Studio Archcraft and published by Graffiti Entertainment. It was released for the Nintendo DS handheld system in 2009.
Advertisement:

The plot involves our protagonist Kairu, who was born in the world of Bel Lenora, a world built and filled with magic. Kairu has the misfortune to be born without any magical ability at all, in the 15-year aftermath of another magic-less person's war of terror. Naturally, no one other than his immediate family trusts him.

Black Sigil is an homage to Super Nintendo RPGs of the mid-1990s. Not related to the 1997 game Blades of Exile from the Exile series.—-