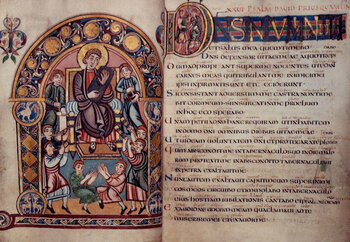 , from 8th-century England
"The LORD is my shepherd; I shall not want."
— Psalm 23:1
Advertisement:

The Book of Psalms is the first book of the Ketuvim ("Writings"), the third section of the Hebrew Bible, and the book of the Christian Old Testament. It is a rich collection of poems, hymns, and prayers that express the religious feelings of the Jews throughout many periods of history. With each of its 150 poems (151 in Eastern Christianity) having its own chapter, it has more chapters than any other book of the Bible.

The Psalms have played a core part in Jewish and Christian liturgy, and are frequently used for devotion and prayer. Psalters are sometimes sold as their own books apart from the Bible, and some Metrical Psalters

have been made to better fit English poerty.

on Wikipedia for more info.