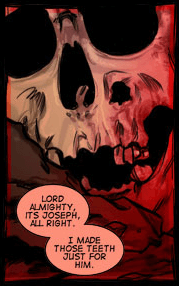 "Also, he never flossed in the back."
"Mom and Dad are going to have to call up kindly Doctor So-and-so. Pick up your dental records. Wanna know why? Because there's gonna be nothing left of your face."
— Tyler Durden, Fight Club
Advertisement:

A crime drama trope. Sometimes a dead body will be so devastated (e.g. burned or decayed beyond recognition) that identifying the victim by their appearance is impossible. The investigators have no choice but to use the victim's dental records to find out their identity.

Dental identification lets the audience know that the death was gruesome without necessarily showing the body. It also adds another layer of complexity to the plot. Was the body really correctly identified? What if the records are missing?

Sometimes the smart criminal knows to circumvent this by removing the victim's teeth.

Sometimes in fiction, a character has his teeth surgically altered so he can fake his death. Such surgery is easily identifiable in Real Life, at least in modern times, and in most cases the best way to fake a death through dental ID would be to switch the records.

A common trope in police procedurals, medical mysteries, and forensic shows. Identifying bodies from dental records is Truth in Television, but it works a lot better in fiction than in real life. See the Notes.

Compare The Girl Who Fits This Slipper. If instead a relative is brought in to positively identify the body, see Identifying the Body.