Literature / The Acts of Caine 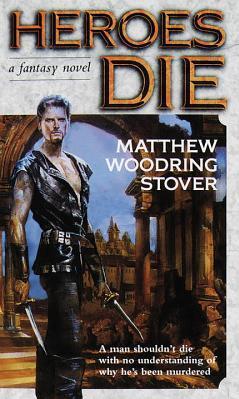 "You, as Actors, have a precisely defined role, irrespective of whether you swing a blade or throw a lightning bolt, joust or heal the sick. It is purely and simply this: Your function in society is to risk your life in interesting ways."
— Blade of Tyshalle
Advertisement:

The Acts of Caine is a series of fantasy-science fiction (trending toward fantasy) books by Matt Stover.

The series's setting is an interesting combination of a futuristic earth run by corporate governments with a strict caste system and loads of repression, and a parallel high fantasy world called Overworld that earth humans have learned to travel to and exploit. This exploitation initially takes the form of The Studio, a company that produces a sort of reality entertainment by sending "actors" to Overworld. These actors are trained in either magic or combat, implanted with a kind of video recorder and sent to Overworld to "risk [their] lives in an interesting way". On the Sliding Scale of Idealism Versus Cynicism, the series tends towards cynicism, although it's not without bouts of idealism. A more detailed synopsis here

, with minor spoilers from the first three books.

The books are centered on the character of Caine and his actor Hari Michaelson. Heroes Die tells the story of Hari/Caine as he tries to rescue his love interest Shanna/Pallas Ril from Ma'elKoth. As with all the books in the series, Heroes Die comments on the morality of violent entertainment and explores of a myriad of other moral questions.

Blade of Tyshalle takes place seven years later, reintroducing Hari and Shanna in their later married, unhappy and semi-retired lives (along with the no longer divine Tan'elKoth). This tedium is of course shattered by plots set into action by the corporate leaders of Earth which Hari's friend, Kris Hansen/Deliann Mithondionne tries to avert. This novel turns the moral philosophizing up to 11 or 12, adds questions of identity, resource usage, destiny (or lack thereof) and humanity's drive to exploit and use up everything. It also features the end of the world, in a way.

Caine Black Knife follows Caine in both the present (three years after the end of Blade of Tyshalle) and twenty-five years ago as he interacts with the Black Knife clan of Ogrillos. The present arc of the story includes a broader exploration of Orbek Black Knife, a side character introduced in Blade of Tyshalle. The philosophizing is turned back down to about 8, but questions concerning the legitimacy of guerrilla warfare and online FPSs are still asked. Also has some rather overt references to either the Iraq War or the Israeli-Palestinian conflict, complete with a suicide bombing.

Caine's Law follows immediately after (and in some cases, simultaneously with or even preceding) the events of the third book, as Caine faces the consequences of a deal he made with a god at the start of his Acting career—and the fallout from the last book, as timelines begin to get screwed around and gods start to intervene. The philosophical questions return with the advent of a mysterious mythical woman called "the horse-witch" and a recurring theme about the treatment of horses and humans. Caine travel through different parts of his life, trying to put things in order for an explosive showdown with the dark Powers at work.

"I love the guy like a brother, but every time he comes to town we end up in another fucking war."
— Duke Toa M'Jest a.k.a. Majesty ''