Due to the Dead 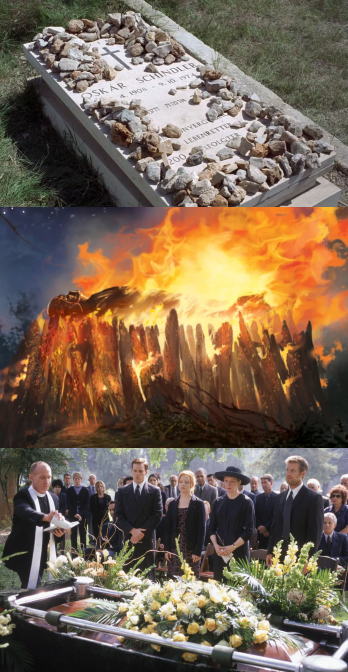 Giving dues: Stones on Oskar Schindler's grave left by the descendants of the Schindler Jews, Luke burning Vader's body on a pyre, and a typical Christian burial service.
"The meeting between ignorance and knowledge, between brutality and culture — it begins in the dignity with which we treat our dead."
— Frank Herbert, Dune
Advertisement:

One mark that distinguishes humans from nonhumans is that humans have funeral rites; they regard something as due to the dead and have for a long time. Indeed, since burials leave archeological evidence, we know that they occurred as many as 300,000 years ago, as a practice among the Neanderthals.

Unsurprisingly, this has been incorporated in art as a trope, as a mark of character, and is Older Than Dirt, with funeral rites in art from ancient civilizations. Evil characters will violate proper treatment of a corpse by mutilating, reanimating, or even eating the dead, though Due to the Dead is one of the most common standards villains maintain. Good characters will (rarely!) do the same to a dead Complete Monster or the like, but usually are marked by their proper respect for the dead, down to even letting Revenge end when the villain is dead; if they have to destroy bodies to contain a plague, or display it to prove that he is really dead, they will often find it Dirty Business. Granting proper due can also be show of respect symbolic of a formerly-evil character's redemption; especially when Redemption Equals Death.

Even when you put The "Fun" in "Funeral", the humor tends to be dark and the characters nasty.

A wide variety of practices are possible, as in Real Life. Cremation and burial are the most common, but such practices as exposing the dead to vultures and other unusual methods can be done in fiction as in life. Even slicing up the body — usually regarded as mutilation and proof of evil — has been done in Real Life as a means to free the soul from the body and has featured so in fiction. In a similar vein of Values Dissonance, even the above-mentioned eating of the dead has been a common funeral rite done in real life as a means to allow the dead to live on in their loved ones. Still other cultures have even Zig-Zagged this trope, regarding the corpse itself as an irrelevant lump of flesh now that it no longer houses a spirit, regardless of whatever rites they may or may not perform to commemorate the spirit that left it. Preserving parts (usually bones) of the dead can be the mark of a Necromancer or of respect, depending on how used; see the Sub-Trope of Dead Guy on Display.

One funeral practice, however, will put the characters on the evil side, no matter how respectfully they carry it out: Human Sacrifice.

Note that some dead are due more than others. The Heroic Sacrifice calls for a well-attended funeral, making The Hero Famed in Story, and perhaps even a monument. Sometimes to mitigate the effect of Dying Alone; What You Are in the Dark may threaten that the hero will die unmourned. Conversely, some are due less than most; the Complete Monster, the Dirty Coward, etc. may be dumped in an unmarked grave with minimal ceremony.

On the other hand, some of the living owe the dead more than others. Family and friends have a duty to carry this out, often through a Shrine to the Fallen. Strangers who perform such things for the dead are acting out of generosity; a Good Shepherd may perform such rites. Indeed, some ghosts manifest in order to properly reward a total stranger who arranged for the burial.

Other ways in which this trope might present itself: closing the eyes of someone who Dies Wide Open; sorting through the deceased's belongings (may result in Personal Effects Reveal); responding with Manly Tears or Tender Tears; a Meaningful Funeral, when most characters show due respect; a Lonely Funeral, when few; Libation for the Dead; Hats Off to the Dead; Dead Guy Junior; a Morality Chain continuing to bind postmortem; a determination to carry on the deceased character's work or Last Request; people wearing The Poppy; and Never Speak Ill of the Dead. Avenging the dead is also common, though it's viewed as less "good" than the other options.

However, no matter how beloved the dead, Excessive Mourning may be decried. Ghosts may complain that it is keeping them from peace, or characters may be criticized for neglecting their duties to the living.

Sometimes, usually For Laughs, a person's cremated remains (cremains) will be put in anything but a real funeral urn, maybe because they don't have the means to shell out for a proper urn, or are misers.

Observing this may be necessary to prevent the deceased from being Barred from the Afterlife and coming back as a ghost or other form of The Undead — which may take the form of an Indian Burial Ground.

Of course, this being a Death Trope, expect huge SPOILERS.

A burial for Grundy

Grundy is buried after Eclipso is defeated, but the Shade gives Rick some advice on how Grundy can come back from the dead instead of being dead permanently.

A burial for Grundy

Grundy is buried after Eclipso is defeated, but the Shade gives Rick some advice on how Grundy can come back from the dead instead of being dead permanently.