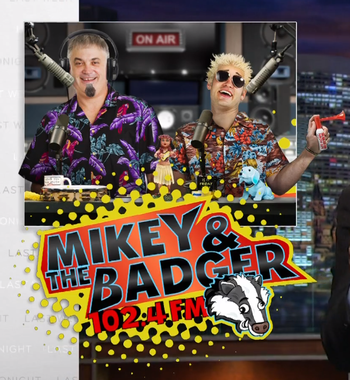 The Dumbass DJ is, as the name suggests, a DJ who is a loud, obnoxious boor who makes moronic quips between songs. When used in fiction, the character is almost always intended to be unlikable; expect everyone else to respond with open derision and hatred. In the very rare cases that you're supposed to like them, they frequently become The Scrappy, a Creator's Pet or (if very lucky) So Bad, It's Good.

Stereotypical Dumbass DJs hold a morning slot for a Top-40 station, and try (sometimes successfully) to amuse their audience with with Toilet Humor, Vulgar Humor, and ridiculous overacting.

Expect them to describe themselves as "wacky," "crazy," or "edgy," insult callers and guests, and scream half of their lines. If they're a pair, expect one to be named after an animal. See also Large Ham Radio; Shock Jock.

Going by his hologram, he appears to be an EDM disk jockey, and he is just as obnoxious as the trope suggests.

Going by his hologram, he appears to be an EDM disk jockey, and he is just as obnoxious as the trope suggests.