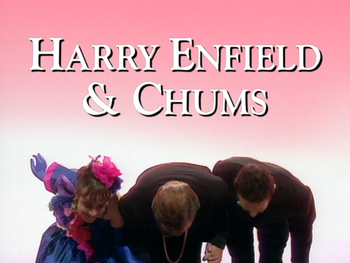 British comedy sketch show from the 1990s, a collaboration between Harry Enfield and Paul Whitehouse (who went on to head up The Fast Show). The partnership was later revived with Harry and Paul. (The other "Chum" was Kathy Burke.)
Advertisement:

Titled "Harry Enfield's Television Programme" for its first series. Not so prolific as The Fast Show, but it still added several Stock British Phrases to the lexicon. The character of Kevin the teenager would go on to have his own spin-off movie, Kevin & Perry Go Large.