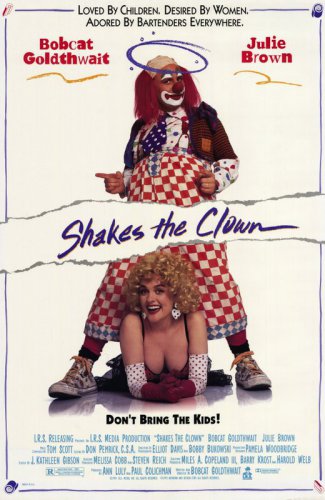 "You're a loser. Your parents had to pay a grown man to come and play with you today, because kids collectively and on the whole think you suck."
— Shakes, demonstrating his excellent people skills and outstanding professionalism.
Advertisement:

Shakes the Clown is a 1992 Black Comedy movie written and directed by Bobcat Goldthwait, who also stars as the title character.

Shakes is an alcoholic clown who's on the verge of getting fired, as his drunken shenanigans often end up ruining the kids' birthday parties he performs at. On top of that, his drinking is messing up his relationship with his girlfriend Judy (Julie Brown), a waitress at the clown bar Shakes frequents and aspiring professional bowler. When he passes out at a bar for clowns that him and his two friends frequent, he winds up being framed for the murder of his boss. Said friends and Judy help him evade the law and two witnesses to the actual murder (who chase after him) as Shakes, while posing as a mime, finds out who's really responsible (at first he thinks he actually did it and was just too drunk to remember) and helps bring him to justice. Meanwhile, Shakes' friends realize Shakes has an alcohol problem, and help/force him to quit.

The movie offers a lot of raunchy jokes, many a Cluster F-Bomb, and cynical humor. It also features cameo appearances by Robin Williams as a mime and Adam Sandler as another clown.