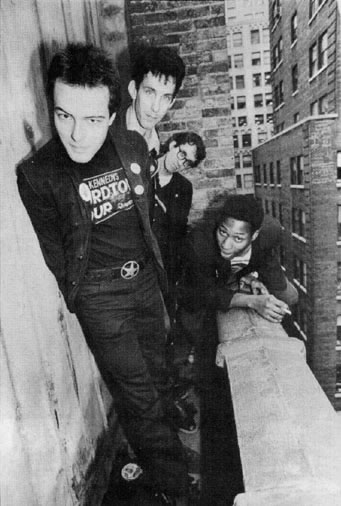 Biafra, Ray, Flouride, and Peligro.
"Is my cock big enough?
Is my brain small enough
For you to make me a star?
Give me a toot and I'll sell you my soul.
Pull my strings and I'll go far!"
—"Pull My Strings"
Advertisement:

The Dead Kennedys were an important Hardcore Punk band from San Francisco, who became famous for aggressive songs and socially conscious, satirical lyrics.

The band were formed in 1978 with guitarist East Bay Ray (also known as "Ray Valium"), vocalist Jello Biafra, bassist Klaus Flouride, and drummer 6025. 6025 switched to second guitar but left soon after, and Ted was recruited as drummer instead. note  Their real names are, in the posted order: Raymond Pepperell, Eric Boucher, Geoffrey Lyall, Carlos Cadona, and Bruce Slesinger.

Their first single, "California Über Alles," was released in June 1979 on the band's own Alternative Tentacles label. It was the song that established their hallmarks: Ray's psycho surf punk riffs, Biafra's sarcastically biting lyrics (parodying California governor Jerry Brown as a fascist hippie), and a rejection of the Strictly Formula loud fast short structure of hardcore punk. During their tour in support, they were invited to perform at the Bay Area Music Awards on 25 March 1980. In typical subversive fashion, the band started "California Über Alles" but stopped quickly and instead played the scathing "Pull My Strings", an attack on the music industry's practices.

The same year, Biafra ran for Mayor of San Francisco on a campaign that mixed serious proposals (banning cars within city limits in response to severe pollution problems, allowing neighbourhoods to elect police officers, legalizing squatting in vacant buildings) with outlandish ones (forcing businessmen to wear clown suits, erecting statues of Dan White so the parks department could sell eggs and tomatoes for people to throw at them, hiring unemployed workers as panhandlers in wealthy neighbourhoods), and using the commercial slogan: "There's always room for Jello." He finished third with 3,79% of the votes.

As he shared the ballot with a Drag Queen candidate named Sister Boom Boom, the San Franciscan authorities responded by passing a law requiring all mayoral candidates in San Francisco to use their real names.

Dead Kennedys' first album, Fresh Fruit for Rotting Vegetables, was released in 1980, containing the famous songs "Kill the Poor" and "Holiday in Cambodia," plus a cover of Elvis Presley's "Viva Las Vegas." The album was a moderate chart success in the UK, boosted by the band's performances there. In May 1981 they issued the single "Too Drunk to Fuck," which reached #31 on the UK charts, giving radio programmers some headaches in the process.

Soon afterwards, Ted left the band and was replaced by D.H. Peligro, who was showcased on the In God We Trust, Inc. EP from the same year, which was an all out hardcore / thrash punk release, containing the songs "Nazi Punks Fuck Off!", which attacked Nazi punks, "Religious Vomit" and "Moral Majority", which lambasted the right wing US government at the time. Their next album, 1982's Plastic Surgery Disasters showed an evolution in the band's sound to include Surf Rock, Psychedelic Rock (it was advertised as "putting the pain back in psychedelic music"), and spaghetti western influences. Famous songs from the period include: "Bleed for Me," "Halloween," and "Moon Over Marin," their almost but not quite ballad about the ravages of pollution.

This evolution continued on 1985's Frankenchrist, which showcased more extended pieces, horns, and synthesizers. High points included the industrial "At My Job," the multi part "Stars and Stripes of Corruption," the organized sports parody "Jock-O-Rama," and the timely "M.T.V. - Get Off the Air." The band got in trouble for including H. R. Giger's "Penis Landscape" as a poster with the LP, and were charged with distributing harmful material to minors. The case ended in a hung jury and was dismissed, but it was a Pyrrhic Victory, as the cost of the trial drove the band and Alternative Tentacles to near bankruptcy despite donations and support from their fanbase and other PMRC persecuted musicians like Frank Zappa. Exhausted, the band broke up in 1986 after releasing their last album Bedtime for Democracy, a 48 minute final tour de force employing many musical styles and their expected thought provoking lyrics, which included several songs expressing disillusionment with the state of the punk scene ("Anarchy for Sale," "Chickenshit Conformist"). One compilation of early singles and lost tracks: Give Me Convenience or Give Me Death, was released in 1987, and the band members went their own way afterward.

In the late 1990's, the band members got caught up in a complicated royalty dispute, and led to a 1998 fraud trial which stripped Biafra of his rights to the back catalogue and gave them to the other members instead (he lost two further appeals and was forced to pay damages). This burned the bridges between Biafra and Ray, Flouride and Peligro thoroughly, worsened by the others inviting Biafra to reunite the Dead Kennedys, which he refused on moral principles. Dead Kennedys albums were reissued on Manifesto Records and tour dates were announced after the court victory, with Brandon Cruz replacing Biafra. (Cruz, a Former Child Star, turned out to be the first in a series of Replacement Scrappys — the new DK's have had five lead singers so far.) This incarnation has been severely criticized for betraying Dead Kennedys' anti-corporate ideals and touring without their most important member. Lately, the group's official site has reported that both Flouride and Peligro are leaving due to health issues, leaving Ray the sole original member.

Biafra went on to become a spoken word performer and political activist, sometimes also collaborating with other bands like Sepultura and Melvins.

Dead Kennedys are the Trope Namers for the following tropes: