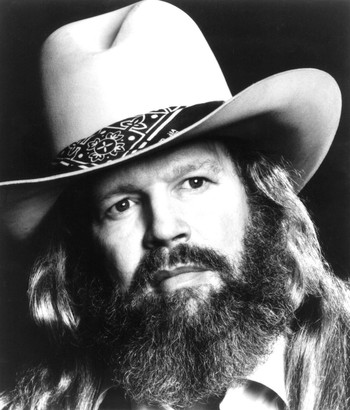 The Long Haired Redneck
David Allan Coe (born September 6, 1939) is one of the predominant figures of Outlaw Country Music, and one of the first names people think of when they think of this subgenre. While largely underground, he has had some success as a songwriter, penning several songs that were crossover pop hits Covered Up by other artists, including "Would You Lay With Me (In a Field of Stone)," made famous by Tanya Tucker; and "Take This Job and Shove It," popularized by Johnny Paycheck (also covered by Dead Kennedys, as well as being the main sample in "Shove This Jay-Oh-Bee", a song by rappers Canibus and Biz Markie appearing in the movie Office Space).
Advertisement:

Beginning at age 9, he spent 20 years in and out of various correctional facilities before beginning his music career in 1968, as a Blues singer. Penitentiary Blues is about Coe's experiences in prison. He began recording Country Music in the early '70s. His music anticipated the "fuck you" attitude of Punk Rock, and proved influential on alt-country, especially the bands that attempted to fuse punk and country. Coe's music and attitude was not only formed from Country, but from blues and early rock and roll.

Controversially, Coe recorded a pair of X-rated country albums called Underground Album and Nothing Sacred. His legacy has been cemented by influencing the Groove Metal band Panteranote (notably, he did a collaboration with three of that band's members entitled Rebel Meets Rebel, which was released after guitarist Dimebag Darrell's murder), rapper and singer Kid Rock and eclectic artist Hank Williams III.

Coe's son, Tyler Mahan Coe, has also made a name for himself, but not as a musician; He's the host of the critically acclaimed country music journalism podcast Cocaine & Rhinestones

. Tyler has yet to cover his father in an episode, in part because they're somewhat estranged from one another, but he also feels too close to David's story to report on it objectively.

Trope Namer for Take This Job and Shove It.