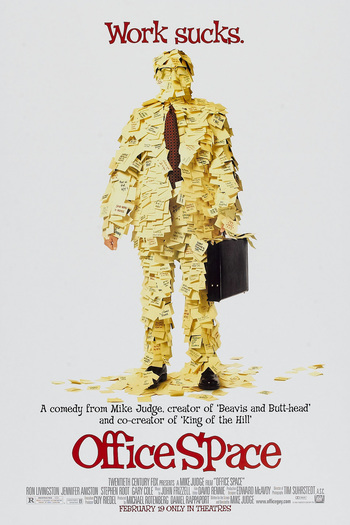 I know.
"We don't have a lot of time on this Earth! We weren't meant to spend it this way. Human beings were not meant to sit in little cubicles staring at computer screens all day, filling out useless forms and listening to eight different bosses drone on about mission statements."
— Peter Gibbons
Advertisement:

Heeeeey, Troper. What's happening? Yeah, I'm gonna need you to go ahead and describe ''Office Space'' here. If you could get that done by Monday, that'd be greeeeeaaaat. Mmkay?

Then Peter gets de-stressed by a dose of hypnotherapy and stops caring about his job — not that he wants to quit, or feels that he should stop showing up; he just doesn't care. Soon after that, some outside consultants interview him, trying to find people to lay off. But instead of puffing up his importance to avoid getting the pink slip, Peter tells them exactly how the bloated bureaucracy of the company stops him (and others like him) from ever doing anything. The consultants, of course, take this as sheer brilliance.

Peter is fast-tracked for a promotion but also discovers that two of his only friends, Michael (David Herman) and Samir (Ajay Naidu), are going to be getting the axe. When he shares the news, the three decide to do the only logical thing — rob the company. They come up with A Simple Plan involving a subtle computer virus, but fail to notice a few very important details, and soon everything starts to spiral out of control.

Got a mobile, Idle Game adaptation in March of 2017 called Office Space: Idle Profits. You play as a new intern at Initech just as Peter, Michael, and Samir start their Penny Shaving scheme, having you install the virus in the system. Help the virus spread and rake in more and more pennies while working your way through the events of the film. Available on iOS

Not to be confused with either versions of The Office, a much more lighthearted comedic take on office work.

"What exactly are the tropes... you do here?"