If I Were a Rich Man 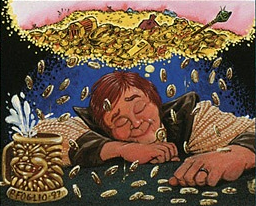 A character has a fantasy about being rich, filthy rich, and the sybaritic lifestyle they would lead. Usually done when a character has just made up a Get-Rich-Quick Scheme that you know is not going to work. Such fantasies typically include bathing in pools of money, and other forms of Conspicuous Consumption.

In a musical, may be the inspiration for a Money Song.

Note that this is just a daydream of it, not an alternate reality, possible future, or the actual result of a wish.

A Sub-Trope of Fantasy Sequence.

Compare Wealthy Ever After, Mock Millionaire (if the character is pretending to be rich).