Film / The Treasure of the Sierra Madre 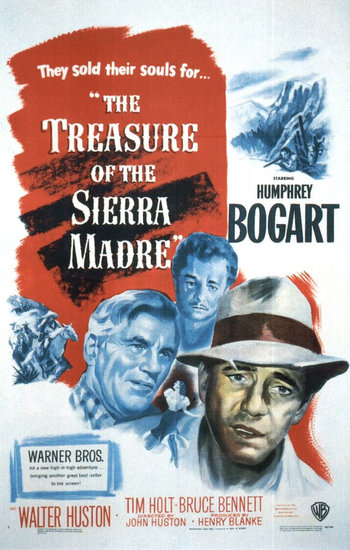 Howard: Aah, gold's a devilish sort of thing, anyway. You start out, you tell yourself you'll be satisfied with 25,000 handsome smackers worth of it. "So help me, Lord, and cross my heart." Fine resolution. After months of sweatin' yourself dizzy, and growin' short on provisions, and findin' nothin', you finally come down to 15,000, then ten. Finally, you say, "Lord, let me just find $5,000 worth and I'll never ask for anythin' more the rest of my life.
Flophouse Bum: $5,000 is a lot of money.
Howard: Yeah, here in this joint it seems like a lot. But I tell you, if you was to make a real strike, you couldn't be dragged away. Not even the threat of miserable death would keep you from trying to add 10,000 more. Ten, you'd want to get twenty-five; twenty-five you'd want to get fifty; fifty, a hundred. Like roulette. One more turn, you know. Always one more.
Advertisement:

The Treasure of the Sierra Madre is a 1948 film directed and written by John Huston, starring his father Walter Huston and Humphrey Bogart, and adapted from a 1927 novel by B. Traven. Father and son both won Academy Awards for their achievements in the film, which was also nominated for Best Picture.note John Huston would also later direct his daughter Angelica to an Oscar in Prizzi's Honor.

A trio of down-on-their-luck gringos in Mexico — Fred C. Dobbs (Bogart), Bob Curtin (Tim Holt), and elderly prospector Howard (Walter Huston) — decide to search for gold in the eponymous mountain range. At first, the adventure seems simple enough; in fact, they even find their gold. What they didn't count on might just be the greatest obstacle of all: themselves.

"I don't have to show you any stinkin' Tropes!":