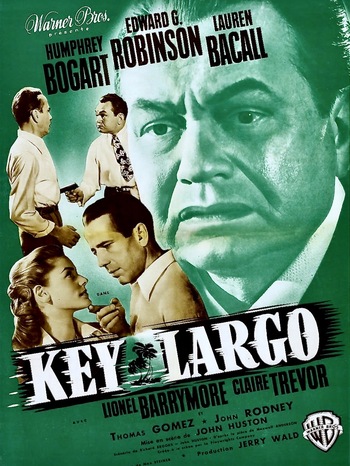 Key Largo is a 1948 Film Noir directed by John Huston, adapted In Name Only from the 1939 play of the same name by Maxwell Anderson.

World War II veteran Frank McCloud (Humphrey Bogart) arrives at a shoddy, run-down hotel in Key Largo, Florida, which is soon revealed to have been taken over by a notorious gangster named Johnny Rocco (Edward G. Robinson). Rocco is waiting at the hotel to conduct business, and awaits the first chance to flee to Cuba where he'd been exiled by the feds.

The hotel is run by the disabled James Temple (Lionel Barrymore) and his daughter-in-law Nora (Lauren Bacall), the widow of Frank's old war friend. James mourns the loss of his son in Italy and wants him to have died a hero. A passing sheriff's deputy, checking on the place as a hurricane threatens to blow in, is also taken hostage by Rocco's gang. A group of local Seminoles try to find sanctuary but are forced to huddle outside as the storm approaches.

The hurricane arrives before the gang can do business and depart, and the mobsters are trapped with the hostages as the hurricane hits shore.