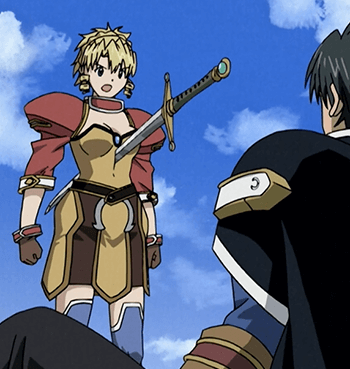 "Careful with that sword. You could poke someone's eye out!"
"Wound! We need a wound here! Make-up!"
— Mystery Science Theater 3000, The Unearthly
Advertisement:

It doesn't matter how many bullets were fired or how powerful the weapon: you won't see entrance wounds, exit wounds or any blood at all anywhere on or near their targets. Shooting victims simply fall down, leaving neat and clean crime scenes. The only way you can tell a shooting victim from a poisoning victim is that the latter will usually be grimacing. It's almost as if they were made of sawdust instead of flesh.

A subvariety of this trope allows for a small amount of blood, looking more like a ketchup stain from a particularly sloppy lunch, to mark the location of a wound. This will sometimes lead to such absurdities as a character with a cut lip conspicuously dribbling blood, while another character who is shot to death is shown with his/her wounds bone-dry!

This was a common trope in Action Series, Adventure Series, and Crime and Punishment Series until recently; for various reasons of taste and censorship, blood was never shown no matter how thoroughly perforated the victim was. Of late, though, shows like CSI and Law & Order have begun to be more explicit/realistic about just how messy most violent deaths are.

Fantasy and some historical works, similarly, will not show blood even when someone is cut or stabbed. In some examples (particularly shows geared towards younger audiences), swords and other bladed weapons will seemingly only be used to clash against each other, and never be shown to draw blood. Two swordsmen may exchange blows and blocks for several seconds, with missed attacks that Could Have Been Messy, or wrestle in a Blade Lock, but whoever wins will find an opening to non-lethally knock out his foe with a single punch, or perhaps throw him to the ground and force surrender at swordpoint. Scenes of the aftermath of a battle will show broken or dropped weapons, discarded shields, fallen banners, dozens of arrows, and the occasional helmet or three, but no clearly visible dead bodies.

A second, somewhat more humorous variation is to depict a relatively harmless conflict or game, such as dodgeball, paintball matches, or water gun fights as if it were a real war or slaughter. Complete with dramatic slow-motion scenes, over-acted last words, and splashes of paint or water where blood would spray.

May be justified in a science fiction setting using Energy Weapons, although it's a common misconception that the massive heat produced by the beam would instantly cauterize the wound before it had a chance to bleed. This is not necessarily the case, as that's actually only possible within a specific temperature range; go over this, and things get hot enough to boil the blood. While a laser in a movie may just knock over people with little signs of blood or burning, it's best not to dwell too much on what the wounds from such a weapon would really look like...

PG Explosives is a subtrope where explosions specifically manage to injure or kill without visible wounds. See also Pretty Little Headshots, Made of Bologna, and As Lethal as It Needs to Be.

However, just because a scene lacks any blood doesn't mean it isn't graphic. Lots of moments in fiction can come off as disturbing to watch despite no blood being visible. This even applies to real life, where countless videos are labeled as Not Safe for Work for the exact same reason.

Contrast High-Pressure Blood when the amount of blood is unrealistic by being excessive. Compare Symbolic Blood, Alien Blood, and Machine Blood when they use a substitute involving robots or fantastical creatures that have something resembling blood. If the viewer is given the choice of having this or not, it is Adjustable Censorship. Usually goes hand-in-hand with Never Say "Die", a Disney Death, and a Disney Villain Death.