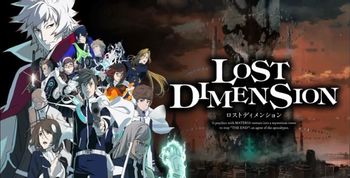 How far will you go to save the world?

In the near future, the world is on the brink of ruin. One day a man calling himself "The End" claims that he will destroy the world from within a giant pillar. Desperate to stop him, the government sends in a group called S.E.A.L.E.D. consisting of several teenagers with special abilities to stop him. Upon entering the pillar, End claims that one of their own is a traitor and in order to proceed to the top, they must eliminate who they believe is the traitor on each floor. Sho Kasugai must use his special ability "Vision" to determine who's the traitor and put a stop to End's game.

Such is the premise of Lost Dimension, an Eastern RPG developed by FuRyu and published by Atlus. Debuting in Japan on August 7th, 2014, it was released for Playstation 3 and PlayStation Vita in America on July 28th, 2015, before being ported to PC on October 30th, 2017.

This Tactical RPG contains examples of: