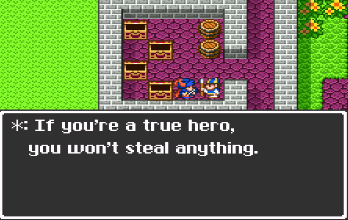 He's actually a different kind of hero.
"No! Don't leave me all alone inside your computer! You can't imagine the things your CPU does to me when you're not watching!"
— Leisure Suit Larry 1: In the Land of the Lounge Lizards
Advertisement:

Given that the popular press would have you believe all computer-related media were created by the powers of darkness, and that video games are all super-violent simulations that corrupt impressionable young minds, you'd think the last thing gamers would need on top of society's disapproval was more guilt.

Especially when it's the game itself that's trying to make you feel like the biggest Jerkass in the world.

Guilt-Based Gaming is when the game tries to deter or punish the player, rather than the character, for a certain course of action. The princess berating The Hero for failing to rescue her pet budgie doesn't really count — while the player might feel bad, it's the character being admonished. However, if the princess were to turn to the camera every time the gamer tries to quit and screech "How dare you think of leaving while my kingdom is in danger!", that's Guilt-Based Gaming.

The most popular methods of employing this trope are:

It's a petty, manipulative ploy that messes with the player's emotions without having to use the plot and writing to do so. It can be effective, acknowledging the player and making them into an integral part of the story... or it can be a cheap shot, making the player feel guilty for putting down the control pad to go and eat.

Either way, it's always a little weird to be scolded for letting a video game down. Morally.

Reactions to this trope can vary. Some people ignore it and do whatever they were going to do anyway, some come to dread hitting the "Quit" option on the save screen, some find it offensive and intentionally stop playing, and some may find they develop a compulsive urge to check in on their virtual pet every hour in case it's thrown a hissy fit in your absence. It can be somewhat amusing as well, since the game treats itself like Serious Business more than the player does.

Compare It's a Wonderful Failure (the results of a failure are shown), What the Hell, Player? (the game calls you out on being a jerk), You Bastard! (the game doesn't stop you, but you're reminded that you shouldn't be enjoying whatever you're doing), and Anti-Rage Quitting (the game penalizes you for quitting mid-game, often in multiplayer games where quitting creates a problematic experience for other players). Contrast Anti Poop-Socking, when the game is encouraging you to take a break from playing.

Has nothing to do with games where determining the guilty party is the main point. Or where you're curing GUILT.

open/close all folders
Guilt-based idling
Guilt-based negligence
Guilt-based quitting
Guilt-based shunning
'' has an instance where one of Jeff's classmates has gift-wrapped a bunch of cookies for a birthday party. Gift-wrapped presents are the main source of loot in this game, so you might think that one of them has something good. If you do open them, not only will you find nothing good, but the classmate will say that he 'can't believe you'd do something so nasty'.
Other
Real Life