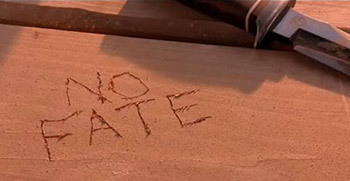 ...but what we make.
The Master: You were destined to die! It was written!
Buffy: What can I say? I flunked the written.
— Buffy the Vampire Slayer, "Prophecy Girl"
Advertisement:

There are those characters who are mere Cosmic Playthings in the scheme of an implacable Fate Because Destiny Says So. And then there are those who don't care about that philosophical mumbo-jumbo and believe that as strong, free-willed individuals, there's no reason why they shouldn't decide their own futures. Screw destiny and all the others who try to discourage them; they're not going to fulfill the prophecy of world destruction because they're the Big Bad's descendant, or become a sacrificial magician. They're going to become who they want to be.

Note that it's only a true Screw Destiny if the characters actually succeed in evading fate. If they fail or succeed but fulfill the prophecy anyway, it becomes You Can't Fight Fate and a strike against faith in individuality. If they set out to Set Right What Once Went Wrong via time travel, and end up making it happen, it becomes You Already Changed the Past. Occurs frequently when rival seers engage in Scry vs. Scry. A hero who screws destiny by pressing on regardless of, or even against, a prophecy, becomes The Unchosen One. If one particular character has this ability while everyone else is helpless against it, then they would be Immune to Fate. If they get ahold of the Tomes of Prophecy and Fate, they might literally rewrite their fate.

Villains often try this as well, particularly in regards to prophecies concerning their downfall. Unlike with heroes who take the Screw Destiny route, this never works, as often, the means that villains employ to try to do this (which often involve attempts to stop the hero from being born or kill him when he is still a child) will come back to bite them hard, and will only serve to ensure their ultimate downfall in the end.

On the Sliding Scale of Free Will vs. Fate, stories where it is possible are Types 2 through 5 on the scale, with Type 2 being by far the most difficult.

An Aesop delivered in shows based around this trope is that what ultimately determines the worth of a human's life is not some sadistic deity or vague cosmic assembly, but the choices of the human themself.

When someone is pushed dangerously close to the Despair Event Horizon, they may prefer this trope's opposite: Resigned to the Call.

Likewise, sometimes this can turn out to be an example of You Can't Fight Fate in disguise, since the character's attempt to beat fate ultimately turns out to be what fulfills it (ala Oedipus Rex, the moral of which is that while Man can't beat fate, at least he doesn't have to look at it). Or it can turn out to be a Self-Defeating Prophecy, where the disaster could never have been averted if the supposed doom hadn't prompted the character to try.

Winds of Destiny, Change! and Immune to Fate are about having the ability to screw destiny as a superpower; the former is changing the odds to favor you instead while the latter is just being flat out immune to fate.

Compare Off the Rails and I Am Not a Gun. If a character successfully ruins a prophecy this way, see also Thread of Prophecy, Severed.

It is worth noting that The Dragon he is fighting is named Fate.

Kain and Raziel at the Pillars

Having pursued Kain across time into Nosgoth's past, Raziel confronts his former master at the base of the pillars Kain will one day condemn to destruction, and learns of his plans to defy the artificial destiny placed upon him.

Kain and Raziel at the Pillars

Having pursued Kain across time into Nosgoth's past, Raziel confronts his former master at the base of the pillars Kain will one day condemn to destruction, and learns of his plans to defy the artificial destiny placed upon him.