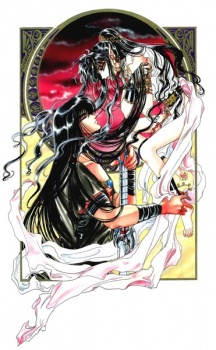 RG Veda is a shoujo manga series by CLAMP, notable for being their professional debut work (as they had previously been a Doujinshi group), and named after the ancient Hindu hymn collection the Rigveda (specifically, the Buddhist version of the same, developed at a time when Buddhism and Hinduism were in conflict. Naturally, gods became demons and vice versa). The series borrows elements of Hindu and Buddhist mythology for its setting and characters.
Advertisement:

300 years ago, the general Taishakuten rebelled against the Heavenly Emperor, killing both him and the guardian god Ashura-ou and installing himself as the king. The Ashura clan was thought to be destroyed until the god Yasha-ou found the remaining child sealed in a forest and began to gather the Six Stars, a group of individuals said to be the prophecied bringers of a celestial revolution.

The manga ran from 1989 to 1996 in the shoujo magazine Wings, and was compiled into 10 volumes. It was adapted into one non-serial OVA in 1991. Several characters from RG Veda have made appearances in other CLAMP works, mostly in Tsubasa -RESERVoir CHRoNiCLE- as alternate universe counterparts.