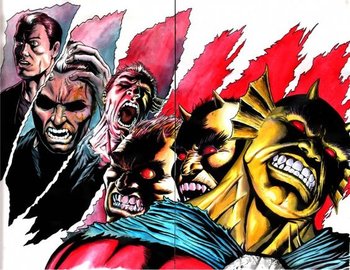 "Jason Blood, born of man
A hidden evil lies within
Spoken verse awakens sin
And frees the demon Etrigan"
"But I'm not my "kind", not anymore — your shadow leeches saw to that. I'm half Toa of Light, half Toa of Shadow. This was what you wanted, wasn't it? Toa consumed by darkness, Toa not hampered by things like mercy or morality. Well, now you can choke on it."
— Toa Takanuva, BIONICLE
Advertisement:

Unfortunately, it's not exactly the hero anymore. He's got glowing eyes, some new Facial Markings, a different way of talking, some new threads, and a lot less compunction about ripping someone in half. It's his Super-Powered Evil Side. Think of it as the Enemy Within when it's not the enemy, or as Jekyll and super-Hyde.

The narrative purpose of having a super-powered evil side is that it provides a way of saving a hero who is otherwise beaten but without making the hero look disproportionately powerful. It answers the question "why doesn't he just do that all the time?" with "because then the evil would take over." Additionally, if it leads to a Face–Heel Turn, it can serve the same purpose as Good Is Dumb in reverse — it justifies taking one member of the Five-Man Band or whatever and making him a match for his entire team while he has given in to evil. Alternatively, the evil side may escape his mind/body altogether, becoming a very dangerous Evil Counterpart.