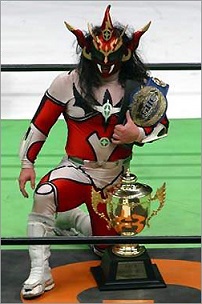 Keiichi Yamada (born November 30, 1964 in Hiroshima, Japan) is a former Professional Wrestler best known as Jushin "Thunder" Liger. He debuted in 1984 and, along with his work in New Japan Pro-Wrestling, also competed for Stampede Wrestling and for All-Star Wrestling in England. He first wrestled under his own name before changing to Flying Fuji Yamada. He started the Liger gimmick in 1989. Over his career, he has also competed for All Japan Pro Wrestling, Fighting Opera HUSTLE, CHIKARA, Pro Wrestling NOAH, Dragon Gate, WCW, Dramatic Dream Team, TNA, CMLL, Ring of Honor and many other promotions. Among his many in-ring achievements, he is an 11x New Japan Pro Wrestling IWGP Junior Heavyweight Champion

, and was inducted into the Wrestling Observer Newsletter Hall of Fame in 1999.

Liger worked his retirement match on January 5, 2020 on the second night of NJPW's Wrestle Kingdom 14 in the Tokyo Dome, and had his official retirement ceremony the following night at NJPW's New Year Dash!!note Not a writing error, the actual title of the event includes the two exclamation points. He's also being inducted as part of Class 2020 of the WWE Hall of Fame, in spite of only having one fight for the company.