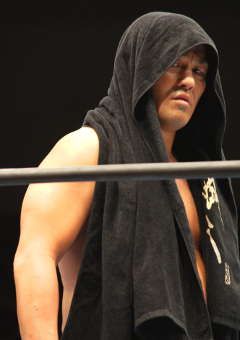 The lonely warrior.
"He choked me out, he heel hooked me, he beat the crap out of me for 30 minutes."
—Ken Shamrock, about his first time training with Suzuki
"His technical ability and knowledge and coordination were beyond anything I could come up with."
—Frank Shamrock
Advertisement:

Minoru Suzuki (born June 17, 1968) is a Japanese Professional Wrestler and Mixed Martial Arts fighter, co-founder of the proto-MMA company Pancrase along Masakatsu Funaki. He debuted in 1988 for New Japan Pro-Wrestling, being a Yoshiaki Fujiwara trainee along with Funaki. When Fujiwara left for the shoot-style promotion UWF Newborn, Funaki and Suzuki got a permission to follow him, and they became part of the UWF roster. The promotion fell afterwards and his faction, led by Fujiwara, formed Pro Wrestling Fujiwara Gumi, but it was short-lived as well. Funaki and Suzuki realized that Japanese crowds really would pay for see "real" matches with non-worked outcomes and launched Pancrase, the second MMA promotion in history. Using the catch wrestling roots they had learned from Fujiwara, which they called "hybrid wrestling", the two became the aces of Pancrase and had legendary fights with names like Ken Shamrock, Bas Rutten and Guy Mezger, with Minoru gaining the King of Pancrase title against Shamrock. While not as famous or successful as his partner Funaki, Minoru made himself known for his brutality and aloofness in and out of the ring, an aura he would keep the rest of his career. Nonetheless considered a great wrestler, Suzuki retired due to injuries making him lose fights and returned to pro wrestling, becoming a main eventer for All Japan Pro Wrestling and later New Japan Pro-Wrestling. In 2015, he'd win the GHC Heavyweight title in Pro Wrestling NOAH and in 2022 he'd win the Ring of Honor World Television Championship, his first title in North America.

"The Tropes with the Worst Personality in the World":