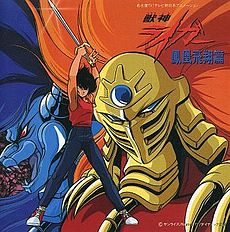 Jushin Liger (獣神ライガー Jūshin Raigā, lit. Beast God Liger,) is an anime superhero TV series created by Go Nagai. Produced by Sunrise, the series ran through 1989 to 1990 with a total of 43 episodes. This anime was responsible for kicking off the wrestling career and popularity of Jushin Thunder Liger.

The story of this anime starts off with three bodies of Dragonite appear. Possessing overwhelming destructive force, they attack the city. By doing so, they also awaken the evil Jashin Drago from the seal he was trapped in. 200 years ago, Drago was trapped in the seal by a powerful warrior with the tattooed mark of the Liger.

Assuming that the warrior is dead, Drago and Empress Zara are free to conquer the Earth using their army of biomechanical beasts. Even the Japan Self-Defense Forces are no match for the Dragonites' awesome power. One of the people fleeing is the protagonist, a teenager named Ken Taiga. Unbeknownst to the Dragonites, Ken realizes that he is the descendant of the Liger warrior.

In a burst of anger, Ken's Liger birthmark appears, and he rises his palm into the air, shouting the henshin command, "LIGER!" which then covers him in demonic, long-haired biomechanical armor. Ken transforms into Jushin Liger to fight the evil forces of the Dragonite!

Tropes from this anime: