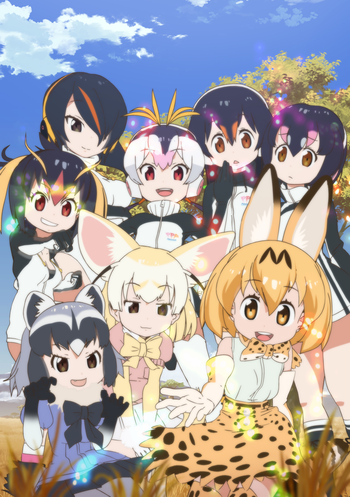 Kemono Friends is an anime that aired during the Winter 2017 season. It is part of a formerly unsuccessful multimedia franchise created by Mine Yoshizaki (of Sgt. Frog and Arcade Gamer Fubuki fame), centered around a mobile game by Nexon which was discontinued a month before the anime aired its first episode. The anime became a Sleeper Hit and revived the franchise in a major way.

Part of the franchise's unsuccessful period was a Slice of Life manga about a new keeper called Nana coming to work at Japari Park with the Friends, which ended after two volumes. The anime's success resulted in the manga being licensed by Yen Press for release in 2018, collecting the two volumes in one. A series of unofficial anime shorts followed the first season's conclusion.

The anime begins as a girl without any memories wakes up in the middle of a savannah before being chased and "hunted down" by a Cat Girl (who was actually playing "Predator and Prey" with her). Said cat girl, calling herself a Serval cat, reveals that they are in just one region of a vast integrated zoo called Japari Park, which is inhabited by Little Bit Beastly girls called Friends who are created when regular animals come into contact with a mysterious substance called Sandstar. The girl, given the nickname Kaban after her backpack, sets off on a grand adventure together with her new friend Serval throughout Japari Park to find out what kind of Friend she is. Friends ensue! During an episode, each Friend is introduced along with their scientific classification. For eyecatches, zookeepers from all over the globe give short lectures on the nature of the featured animals.

In the last week of September, 2017, a wrecking ball was taken to the franchise: Kadokawa fired Tatsuki over the 12.1 episode, which led to Japan's social media exploding and the entire staff resigning in protest. The reaction in Japan was so bad that the company's stock dropped over 33% in a day after this event. Although Kadokawa publicly apologized for causing the fan outrage and began to negotiate with the staff, it was decided that both Tatsuki and Yaoyorozu were not returning for the second season.

Despite this, the franchise continued on; aside from a couple of mobile spinoffs and CDs in the interim, a series of shorts titled Welcome to Japari Park aired summarizing the story mode of the original Nexon game. The second season, Kemono Friends 2, premiered in January 2019. It was handled by Tomason, with its plot (much like season 1) being a soft reboot of the previous continuity. Serval is joined by fellow feline Caracal, and the pair set out with a mysterious child named Kyururu to find out what to do with him. This season was eventually retold in manga form in Shonen Ace, written by Ryu Naito. An arcade/mobile game based on the anime continuity was released by Sega, under the name Kemono Friends 3 on mobile and Kemono Friends 3: Planet Tours in arcades.

on Steam. Discotek Media has additionally licensed the anime’s first season on DVD and Blu-Ray, with an English dub done by Sound Cadence Studios.