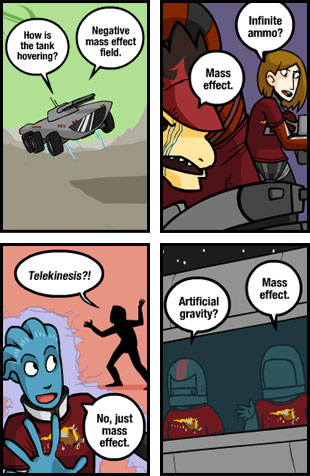 "How did this caption get written?"
"Mass Effect."
Some settings have Phlebotinum. It helps move along the plot, Hand Wave various characters' improbable powers, and conveniently get the Heroes from point A to point B quickly. It can let you just say A Wizard Did It.
Advertisement:

But then some settings...are different. They have nothing but Phlebotinum. That City of Adventure the heroes are exploring around? It's completely floating in the air; not one building is touching the ground. Why? Phlebotinum! In fact, the whole planet is probably bound together with some sort of magical or super-science energy, without which it would simply explode. Every single thing around requires whatever the local flavor of Phlebotinum is to run in worlds such as these, whether it's magic, nanomachines, or something else similar.

The main dividing line between a world that simply has a lot of Phlebotinum and one that's made of the stuff is this litmus test: if you took away the Phlebotinum, would your world still exist in any meaningful sense, or would it more or less just collapse? If it would, your world is just plain Made Of Phlebotinum.

There is actually a great deal of evidence that Real Life is thus: when you develop a potent capability to the point that there are few side effects, you start using it for everything imaginable. When we learned to harness electricity easily, the only things that weren't 100% electrical were the things that we used to generate electricity. When computers became advanced enough, we started carrying them around with us. Litmus Test? If you took away computers, it'd re-create The Great Depression. If you took away electricity, ninety percent of the world would die within a decade.

If something is literally made of Phlebotinum, see Made of Magic.