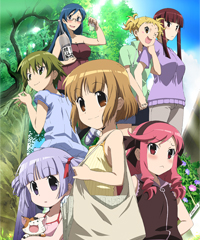 Middle school student Kana Nakamachi has just lost her grandmother, her only remaining family member. Fearing that the repo men will take her too, she packs up what she can into a knapsack. With just that and the clothes on her back, she sets off to find a place to stay. Meanwhile, the Fuhshin News office is looking for work, and the closest thing they've been able to find is a stray cat. With no one willing to take Kana in, she ends up having an unfortunate run-in with one of Fuhshin's employees, who's out for a bike ride, and gets knocked unconscious.

When she wakes up, she finds herself in the office. They're willing to take her in. The Fuhshin News is an odd place. With an all-girl staff full of oddballs, Kana tries her best to adjust and make her way in the world as a delivery girl.

Kanamemo is a yonkoma manga by Shoko Iwami, which was serialized in Manga Time Kirara Max from 2007 to 2013. The manga got an anime adaptation in the summer of 2009. US residents may legally watch the anime at Crunchyroll.