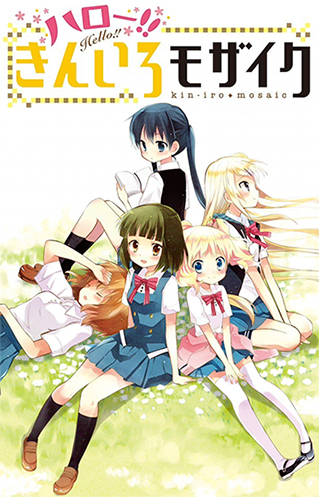 Kiniro Mosaic (translates to Golden Mosaic, also called Kin'iro Mosaic or KinMoza!) is a Slice of Life comedy manga drawn and penned by Yui Hara serialized in Manga Time Kirara Max. It received an anime adaptation by Studio Gokumi in the Summer 2013 Anime season, while a second season, titled Hello!! Kiniro Mosaic, aired during the Spring 2015 Anime season. The manga is licensed by Yen Press in North America starting in December 2016. In August 2021, a theatrical film titled Kiniro Mosaic: Thank You!! was released, serving as the Grand Finale of the series.

Junior high student Shinobu Oomiya decides to do a week-long homestay in England. Her hosts, the Cartelets, have a daughter called Alice the same age, and despite the language barrier, the two become close friends. When the week ended and the two had to part, Alice swore that she'll one day go to Japan and see Shinobu again. Years later, she does just that... by transferring to Shinobu's high school and coming to stay with her, surprising her in the process. High levels of cuteness ensue.

Compare to Yui Hara's other 4koma comedy Wakaba Girl, about a sheltered Ojou trying to fit in and make friends.